Wine to Cellar: A guide to aging and cellaring wine

The history and introduction to wine cellaring

The modern temperature controlled wine cellar can trace its origins back to a time long before there was refrigeration and cooling systems.  There is archaeological evidence that ancient civilizations in Georgia and Iran were making and drinking wine as early as 6000 BC.

One of the main driving forces for the development of storing wine was the increasing production and its increasing geographic distribution.  The earliest evidence of stored wine comes from 7000 year old pottery jugs that were buried in the dirt floor of a Neolithic kitchen in Iran.

The Romans used catacombs, and subterranean cemeteries beneath their cities to store their wine. Not until the sixteenth century was any semblance of modern wine management in evidence. Vintners were beginning to understand that wines exhibiting high levels of acidity and flavor components aged well, they also realised that a barrel needed to stay filled completely to fight destructive oxidation.  Large casks of top-quality German Riesling were diligently preserved because these wines exhibited the correct balance of sweetness and acidity and were being kept in cool cellars, with constant topping up.

Henry VIII of England imported wines from all over Europe particularly Anjou, Gascony and Burgundy – but these came in barrels.  Many sixteenth century wines did not keep well, and of those that did had an alcohol content of up to 17%.  The King spent a fortune keeping his court in wines – up to 300 barrels a year.  Not only was this volume required for his lavish entertaining, but as these barrels were emptied, resulting oxidation quickly allowed the wine to deteriorate, hence the need for so many barrels.

The seventeenth century development of storing wine in corked bottles was the real break-through in the aging of wine.  Glass bottles are impervious to air and corks offer a good seal that allows very small amounts of air to enter the bottle over many years helping the aging process.  This subsequently led to the actual shaping of today’s cylindrical stackable bottle.  The use of corked bottles quickly led  to the re-application of drinking aged wine, as wine drinkers once did during the roman Empire, when the use of the amphora allowed extended aging. The French began the practice of digging wine caves designed specially to store their wines.

Wine is one food or beverage that has the potential to improve with age – though not all wines will get better.  Of all the things that make wine wonderful and more alluring it is its potential to age.  No other food product is expected to improve with age as is wine – no matter how good your beef dish  is  today, it will not be better in 20 years times – compare this to a bottle of Te Mata Coleraine 1998 or Chateau Petrus 1982 which will age for twenty or  fifty years respectively.  The age-ability of a wine is what makes its reputation soar – but not every wine is made to age and not every wine should be aged.

That certain wines must be aged to achieve peak quality is perhaps so pervasive in our consciousness that it can be considered common knowledge.  Many people know that wine must be stored in a certain manner, though unfortunately few can recall the details and fewer again understand the science behind aging.  This in part explains why so many people underestimate the importance of proper wine storage and why Wine to Cellar is here to provide a cellaring solution.

What stops us from cellaring our precious wines? 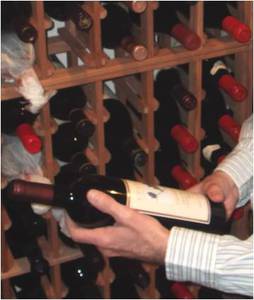 Although common knowledge and the science confirms the need for good storage conditions – many collectors or wine aficionados cut corners.  Why do they do this?

Partially to blame is the fact that we have all enjoyed some pretty good wines brought up in “bad” neighborhoods. But we tend to only take note only when something is not as good as we would have liked or desired.  Generally, this is moderately rare in our temperate climate for wines stored for less than 3-5 years.  But the negative effects of improper storage can not be avoided – over time poor storage will always have an effect on the wine’s flavor and bouquet.  Sometimes the effect is subtle, and at other times it can be very pronounced.  But even drastic changes may go unnoticed.  Our taste buds have weak memories and unless you have a sample of properly stored wine on hand to compare, often it’s a case of “you don’t know what you are missing”.

Storage or aging wine is both a science and an art.  The science of chemistry drives the aging process and some of the reactions are well understood. But cellaring wine is also an art as wine composition is diverse and complex and it is extremely difficult to predict the end result that aging will have on any particular wine. So there is an element of mystery with many wines, especially those produced by the artisan winemakers, which in turn creates the allure of wine.  There are no guarantees when it comes to aging wine.  We have all been pleasantly surprised by wine that should never have improved with age (but did), and vice versa.

So what is proper storage?.  First let us look at the basics.  All wine is perishable. Unlike whiskey there is insufficient alcohol in wine to prevent it from going bad over time.  Storage requirements are a function of the type of wine and its intended use.  Fine wine destined for 2+ years of storage and eventual consumption by people with an interest in wine requires much stricter control that a bottle of table wine destined for the next months spaghetti sauce.

The wine aficionado  is however looking for something different - wines that improve with age and that may only reach their potential after 5, 10 and up to 25 years and beyond in the bottle.  Remember it is not to have an old bottle of wine, it is to have a wine that tastes and has an aroma (and if matched with food) that provides a unique and personal experience.

The next part of our guide explores the science behind the aging and cellaring process.