Syrah young, old and cellared - how do they go with food? 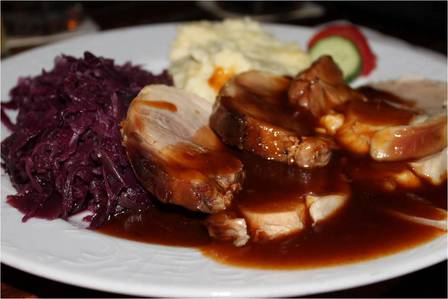 The classic characters of Syrah are blackberry, blueberry, boysenberry, black pepper, liquorice and olives. New World Syrah tends to much more fruit driven and fine grained. In the case of old world Syrah it is more full bodied and tends to have more earthy, graphite and barbecue flavours. Some other characters found in Syrah include clove, vanilla, chocolate and herbs.

There is much debate and discussion regarding the cellaring characteristics of Syrah. Some people are of the view that Syrah is only at its best after 7 – 10 years of cellaring. Whereas others think Syrah can be drunk both young and aged and that both of these options show different virtues of this grape variety. Recently, I read an article by Matt Kramer (an America wine critic) on the need to cellar Syrah to get the most out these wines. To demonstrate his point he tasted Dehlinger Syrah from the 2007, 2005, 2002, 1998 and 1994 vintages. Dehlinger winery planted its Syrah in 1989 in the Russian River Valley. The clone planted is believed to have its origins from the Chapoutier family vineyard in the Rhone Valley, France. The conclusion from the tasting was that the 1994 (the oldest in the range) had developed quite different characters compared to the younger wines with a hint of mint, along with the most delicious scent and taste of ripe fruit alloyed with Syrah’s signature gamy and smoky notes. The older vintage was layered with flavours. Matt Kramer was convinced that Syrah needed cellaring to reach its greatness but Mr Dehlinger, who also shared in the tasting, was of the view that both young and old wines were rewarding in their own ways.

The other interesting feature of Syrah is the tendency to blend it with a range of other grape varieties. In the case of the Rhone Valley, France, Syrah is blended with Grenache or Mourvedre to assist with filling out the mid-palate. Syrah is also often blended with other grape varieties such as Cabernet Sauvignon, Sangiovese and even Pinot Noir at times. In these cases the Syrah tends to soften tannins and enhance the fruitiness of the wine.

The black pepper character in Syrah has recently been identified as coming from the presence of rotundone, a sesquiterpene (a particular class of terpenes) which is sourced directly from the grapes as opposed to degradation of other compounds as is the case for many other flavour causing components in wine. Rotundone has a very low sensory threshold at around 16ng/L. Because the peppery causing chemical is in the grapes (believed to be the skins) then a range of clonal or environmental conditions can be used to influence the pepper character of Syrah. Most of the rotundone is extracted from the skins during fermentation.

Taking all the characteristics discussed above, then what might be the most appropriate food match with this wine and how might this change with cellaring. Conventionally, foods like barbecued meats, lamb, venison and game would be considered ideal matches. For cooler climate Syrah, with a little less rotundone, then lamb might be a better option and then dependent on the spiciness of the wine add some clove or mint. For the warmer climate Syrah try either grilled for barbecued venison then add a bit more pepper and perhaps a touch of cumin to enhance the fruit flavours. The cumin along with many other herbs and spices contains anethole which provides an anise flavour. Anise and liquorice flavours are common characteristics for Syrah.

Considering the effect of cellaring on Syrah and appropriate food matches, with age the fruit is less dominant and the gamy, tobacco and smoky characters tend to be more prevalent. Foods with either cloves added or other complementary foods such as recipes with coffee, hazelnuts, toasted coconut or five-spice will all go well. In this case compounds like eugenol will provide the common link. So for an aged Syrah I would recommend moving to food where the emphasis is more on the anise-spice-cloves end of the spectrum rather than the fruit. One option is a beef roast marinated in cloves, vinegar and other spices.